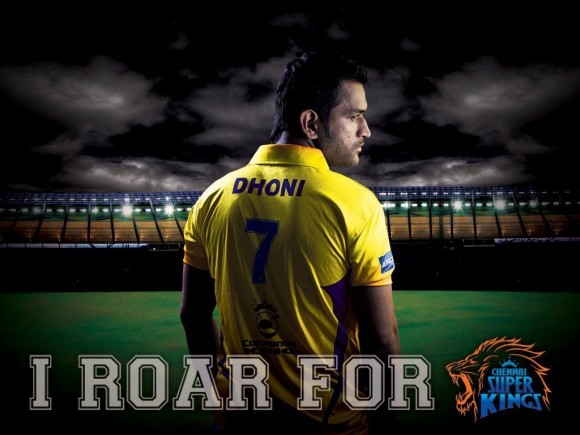 Say hello to the most consistent and the most formidable team of the Indian Premier League. Lead by the charismatic MS Dhoni, who also happens to be the man in-charge of Team India, they have been one of the most balanced sides over the years. They were the runners up in the inaugural edition and winners in 2010 and 2011. They are the only team to have made it to the semis/play-offs in all five seasons of the IPL.
Variety in the batting line up - CSK’s biggest weapon:
While the Super Kings have hard hitters like Suresh Raina, Dwayne Bravo and MS Dhoni, they also have orthodox batsmen in Michael Hussey and Subramaniam Badrinath. Besides, they also have fluent stroke-makers in du Plessis and M Vijay to support their sloggers in Albie Morkel and Ravindra Jadeja. With most of the aforementioned players more than willing to take up the role of a floater in the batting line-up, they have the required variety to succeed in this format.
Tailor-made Indian talent for T20s:
Dhoni and Raina have been regulars for Team India over the years. Ashwin and Jadeja are an integral part of the International line up as well. With talent like M Vijay and the Rahul Dravid of domestic cricket - Badrinath - they have the strongest bunch of local players in their brigade. U-19 sensation Baba Aparajith, who was one of the most consistent performers in the U-19 World Cup, is another addition to the 2013 squad.
Shades of vulnerability in bowling - CSK’s darkest fear:
Mumbai has a Lasith Malinga, Kolkata has a Sunil Narine, Delhi has a Morne Morkel and Hyderabad has Dale Steyn. Will Ashwin be able to match them? Can an inconsistent Dirk Nannes handle the pace attack? Hilfenhaus and Bollinger are not even in the reckoning for the Aussie team and it’s tough to expect miracles from them too. Dwayne Bravo and Albie Morkel are the part time options available along with Ravindra Jadeja. Though the part timers with Ashwin look perfect for the wickets we find in Chennai these days, the bowling attack is CSK’s grey territory.
Super Heroes to watch out for:
Ravindra Jadeja: A street smart cricketer with tremendous versatility is destined to succeed in a format like this. The IPL deserves the credit for Jadeja’s story of rags to riches. Despite being a part time bowler, the accuracy in his bowling is commendable. Jaddu can bowl 4 overs without giving anything away and can also be a handy batsman in the lower middle order. His striking abilities can be put to good use if the team decides to promote him as a pinch hitter at any stage during the tournament.
MS Dhoni: He showed it in the 2011 World Cup final, he has shown it in the previous seasons of the IPL and with the confidence he would have gained by thrashing Australia 4-0, ‘Captain Cool’ Mahi will be a force to reckon with. His unbelievable ability to stay calm under pressure can send jitters to any opposition captain. With an ability to adjust his style of play to any given situation and with those quick reflexes, he would walk in to any superhero movie cast without much of a debate.
Suresh Raina: A 5 foot 4 inch Raina has never been short of runs in the T20 format. With 2254 runs in 5 seasons, young Raina is the leading run getter in the IPL. With his power hitting, he has sidelined his weakness against the bouncers and mastered this format, thanks to his fearless style of batting. The crowd in the stands at deep mid-wicket always has some catching practice to look forward to when Raina is at the crease.
Who’s fit and who’s not:
The Super Kings are a fit bunch of folks. No unavailability reported yet. However du Plessis, who suffered a back injury during the Pakistan series, is a doubtful starter. But, the injury isn’t too serious to rule him out of the League.
The Squad:
M.S.Dhoni (c and wk), Faf du Plessis, Ravindra Jadeja, Murali Vijay, Subramanian Badrianth, Ben Hilfenhaus, Jason Holder, Michael Hussey, Srikkanth Aniruddha, Baba Aparajith, Ravichandran Ashwin, Subramanian Badrianth, Dwayne Bravo, Akila Dananjaya, Albie Morkel,  Imtiaz Ahmed, Shadab Jakati, R.Karthikeyan, Nuwan Kulasekara, Ben Laughlin, Ronit More, Chris Morris, Dirk Nannes, Suresh Raina, Ankit Rajpoot, Wriddhiman Saha (wk), Vijay Shankar, and Mohit Sharma.
Tweet

The CSK juggernaut will keep rolling this year as well.

the most consistent or the only consistent team in IPL....ek hi baat bolunga inke liye "KOI TO ROK LO" :DD