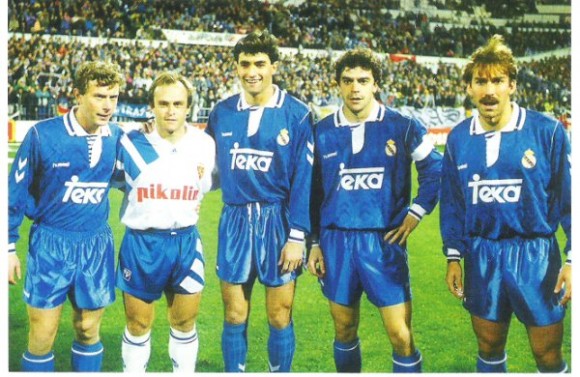 Real Madrid C.F. is known for buying legends rather than making them. I strongly disagree ,there have been many such players who came through ranks of castilla and making it to the top like santiago bernabeu yeste,iker casillas ,guti , de la red and so on.. La Quinta del Buitre is the moniker given by a journalist to the five homegrown Real Madrid players who were at the core of the team that dominated Spanish football in the 1980s. The name (“Vulture’s Cohort”) was derived from Emilio Butragueño’s nickname El Buitre. It consists of Butragueño ,Manolo Sanchís, Martín Vázquez, Míchel and Miguel Pardeza . This group of young players broght new stamina to the team and they were representatives of the new dinamic the entire Spanish society was experiencing in those late 1970s and early 1908s. With the help of coach alfredo di stefano the group made a impact winning amongst others two UEFA Cups and 5 Spanish championships in a row. Sanchís was the only member of La Quinta to never play for a club other than Real Madrid. By winning the Champions League twice (in 1998 and 2000), he also managed to accomplish what La Quinta had failed to achieve in its glory days. He retired in 2001 as the last active member of the famous cohort. In 1998, Sanchis was even awarded the Champions League Trophy first, because he was by then the captain of Real Madrid and had played the whole final against Italian giants Juventus F.C.. Most fans remember galacticos and di stefano (as a player) era as the best in real madrid history but one of the dominating was la quinta era where homegrown players made history rather than foreign imports

The Roar of "El Tigre"