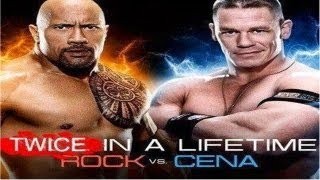 It was obvious when The Rock stated that he would once again become WWEchampion the night after WrestleMania28 and he announced his title matchfor Royal Rumble on Raw 1,000—it was going to happen.Now that it has happened, what does the future hold for The Rock?The Rock appeared the night after Royal Rumble celebrating his victory but hasn’t been seen since. He is a part-time wrestler, so he isn’t expected to be on TV every week.CM Punk, on the other hand, is on Raw each week doing his best to continue the feud with his rants and frustrations about losing the title. They are now set for a rematch at Elimination Chamber.A few minutes before The Rock won the WWE Championship, John Cena won his second Royal Rumble. The next night, he announced that he would challenge for the WWE title at WrestleMania. As a result, many expect a rematch from last year between The Rock and Cena, this time for the WWE title.It is tough to predict who will win the WWE Championship cause it will be effecting either of their  Movie career as both The Rock and John Cena appears in a positive role in WWE it is obvious that if one wins ,fans would be disappointed for other as we all know that both have many common fans in both wwe and movie career.If we go through the last year road to wrestlemania we would find that it caused Cena to lose many of its fans as he was stated negative side.If that’s the case, then why put the belt on Rocky in the first place?Well, why not? The Rock is a huge star, regardless of how many times he wrestles. Putting the title on The Rock and having him defend it at Elimination Chamber, his first time competing at the event, will increase the buys of one of WWE’s secondary pay-per-views.I’m not as upset about this match as others are. They put on one hell of a match, and it was a huge moneymaker for WWE. WrestleMania 28 recorded over 1.2 million buys, mostly because of The Rock vs. Cena. So, of course WWE wants to go back to what made them a lot of money.The Rock attracts both casual and hardcore fans to the product. It made sense to put the title on him while on the Road toWrestleMania. He can promote WWE while doing interviews for his upcoming movies.Cena did not hold the WWE Championship for all of 2012, surprising many. We all knew that wouldn’t last long into 2013 and we were right when Cena won the rumble.Cena will avenge his loss to The Rock and win his 11th WWE title.As a result, The Rock will hold the title for a little over two months and then disappear until the summer.So, we should take The Rock as WWE champion for what it is—using the biggest name in the business as a transition between CM Punk and Cena. But still the question arises whose career would be effected ? .We all know both Cena and Rock are moneymaking product to WWE but if Rock wins wouldn’t Cena be disappointed by WWE board as they are giving more attention towards The Rock .What will be Rock’s Future as champion?  lets wait for wrestlemania .This time it would be one of the most electrifying wrestlemania ever seen
Tweet