Arpit has added a note -
NZ closing in on a historic win here. Vaughan et al seem to suddenly have gone quiet on Twitter. They were all chirping non-stop while Aussies were being butchered in India.

South Africa to play 1st ODI against India in Pinks

Railways bowler Karan Thakur does an Anil Kumble... Grabs all 10 wickets in an innings 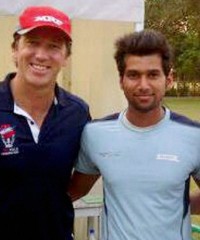