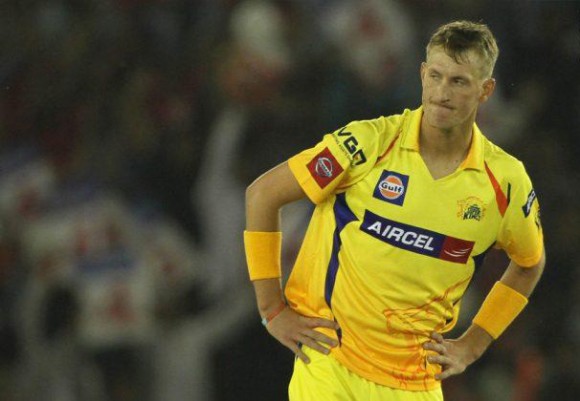 Chris Morris, for six hundred and twenty five thousand dollars to the Chennai Super Kings, sold!” For a split second after auctioneer Richard Madley’s announcement, there was a stunned silence in the hall where all team owners had assembled to ‘shop’ ahead of the 2013 edition of the Indian Premier League. A news channel bringing a blow by blow account of the auction flashed headlines which read ‘Windfall for unknown pacer Morris’, while another sports bulletin flashed ‘Christmas comes early for South Africa’s Morris’. The element of surprise understandable given he had represented his country in just one Twenty20 international prior to the auction.
Far away in Kimberly, a town known for its diamonds, Morris and his Highveld Lions teammates had just returned from an early morning training session, oblivious of the fact that three teams had bid for him.  With his base price of US$ 20,000 reduced to an inconsequential number, Gordon Parsons, the bowling coach of the Highveld Lions, was glued to his iPad, following live updates. When the hammer finally came down at an amount 31 times his base price,he casually joked about diamonds raining in Chennai. That sparked off a celebration of sorts in the dressing room with Morris completing a graduation from a domestic cricketer to a man with money he hadn’t made or seen in his four years as a franchise cricketer in South Africa.
Morris’s height helps him extract steep bounce and his ability to swing the ball at good pace has seen him pick up wickets regularly in the domestic competition back home. Parsons feels South Africa’s strong representation at the IPL at the coaching level has meant some of the domestic talent back home has caught the eye of a few teams.
Inputs and potential aside, the Champions League Twenty20 2012 held in South Africa provided Morris an opportunity to showcase his ability to a bigger audience outside the country, and he didn’t disappoint. He played a pivotal role in helping Lions reach the final, enroute which they beat three IPL sides. Against Chennai Super Kings, Morris took 1 for 24 and scored a vital 7-ball 12 cameo to help Lions chase down 159 in a tense finish. His lively pace and consistency saw him return with miserly figures of 2 for 7 in 4 overs, resulting in a match-winning spell against Delhi Daredevils in the semifinal, which Parsons felt was the reason why he was a hot pick at the auction.
After playing a key role for Lions in South Africa’s domestic T20 competition where he was the highest wicket-taker this year, Morris hopped onto the next available flight to Chennai and even landed at training a few hours later despite fighting jet lag. He made an impact the very next day when he returned with figures of 2 for 27 in 4 overs against Kings XI Punjab on debut in Mohali, after leaking 11 runs off his first over and has performed well since.
In a setup like Chennai, where the overseas players pick themselves, Morris has done well to play in all the games he has been available so far. South Africa has always produced allrounders in plenty, of course in different moulds. Jacques Kallis, Shaun Pollock, Brian McMillan, Lance Klusener and Albie Morkel, have all played vital roles for the team at various stages. With Morris also included in South Africa’s shortlist for the Champions Trophy, another allrounder is waiting to be unleashed at a big stage.
Morris’s rise to prominence for his ability to bowl quick and his handly lower-order batting makes him an ideal finisher.
Tweet