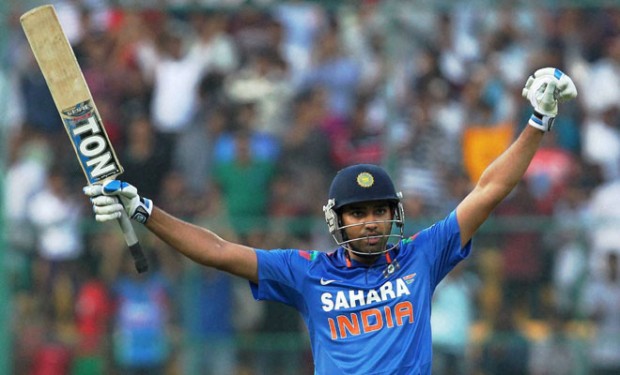 India defeated Australia by 57 runs in the 7th and final ODI between the two sides thereby clinching the series by 3-2. Batting first, India posted a mammoth 383/6 riding on Rohit Sharma’s blistering doube century. Australia gave India a scare as James Faulkner scored a magnificient 116 runs but in the end the target was too big to conquer as Australia folded their innings at 326 runs in 45.1 overs.

Rohit Sharma blasted his way into the record books with a brilliant 209 off 158 balls. The Mumbaikar thus became only third batsman in the history of ODI cricket after Virender Sehwag (219) and Sachin Tendulkar (200 no) to reach the coveted double ton. Enroute his blistering knock, Rohit Sharma created a world record by hitting as many as 16 sixes along with 12 fours. His 16 sixes bettered Shane Watson’s effort of 15 sixes against Bangladesh in an ODI match.

Needing to score 384 in order to win the seven-match series, Australia got off to the worst possible start losing Aaron Finch with the scoreboard reading only 7 runs. Australia continued to lose wickets at regular intervals and by the time they had reached 138 runs they had already lost 6 wickets with only Glenn Maxwell being the significant contributor with a fiery 60 runs off just 22 balls. Then Shane Watson and James Faulkner combined to add a whirlwind 67 runs partnership in just 36 balls but Ravindra Jadeja got Shane Watson out for 49 runs thus giving India the much needed breakthrough. But then an epic 115 runs 9th wicket partnership between James Faulkner and Clint Mckay gave the Indians a big scare. Australia almost pulled it back in their favour through some valiant effort from James Faulkner who scored his maiden century but it was way too much. James Faulkner also entered the record books by scoring the fastest century by an Australian as he plundered 116 runs and was the last Australian wicket to fall.

Put into bat by the Australian skipper George Bailey, the home team rode on Rohit Sharma’s brilliant batting display. He was first involved in a 112 runs opening partnership with Shikhar Dhawan (60), their sixth century stand in 19 innings, and their third such opening partnership of this series. Rohit and MS Dhoni then added an awe-inspiring 167 runs off 94 balls for the fifth wicket. Skipper Mahendra Singh Dhoni scored a brutal 38-ball-62 with seven fours and two sixes. India scored 151 runs in the last ten overs, of which 101 came in the last five. An injury to Shane Watson did not help the Australian cause and along with the docile pitch, the shortness of the Chinnaswamy Stadium’s boundaries and the waywardness of Australia’s bowlers were responsible for giving Rohit Sharma and India the perfect stage to post the huge total.

Man of the Match and Man of the Series: Rohit Sharma

El Derbi Madrileño: The battle to claim the title of "Madrid's Big Brother" 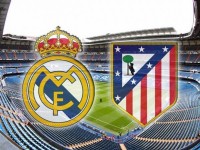