Does the Indian Team need a new captain in Tests to move ahead? 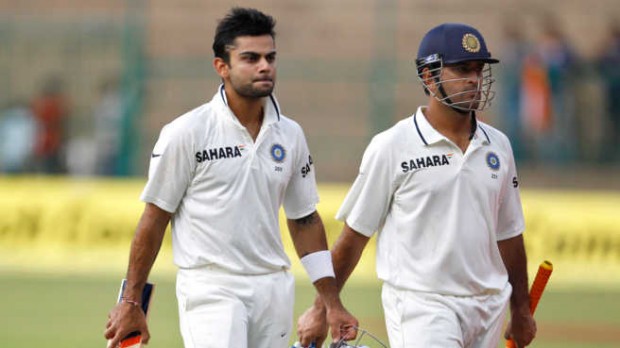 Another foreign tour has come to an end, and the story remains the same. Team India has failed to register a single win during the whole tour, and this includes the utterly dismal performance in the tests. Be it the tour of South Africa, or the tour of New Zealand, the Indian Cricket Team has looked as ordinary as any underdog team. The critics have gotten an opportunity to point out various factors for such disappointing show from Team India. While Duncan Fletcher has still managed to escape the criticism, the critics have definitely not missed out on M S Dhoni.

Quite certainly, the Indian team is going through a rough patch while playing the foreign pitches. But the fact that only MS Dhoni is being blamed for such ordinary performances is not right. Dhoni has been captaining the Indian side from 2008, and he has had a lot of success as the captain in all the formats of the game. Under Dhoni’s captaincy, Team India climbed to the top spot in the ICC Test Rankings, and dominated for quite some time. But, the horrible results during the tours of England and Australia (India suffering a 4-0 test series whitewash on both the occasions) have dented Dhoni’s image as a good test captain. To make things worse, Team India failed to win the test series when England toured India in 2012 end (India lost the test series 2-1). For the past 3 years, India has not won a single test match overseas, and all this data has alarmed the common public and the critics to raise concerns over Dhoni’s Captaincy in Test Matches. The magnitude of the criticism has been so huge, that even the Sourav Ganguly, the great former Indian captain, has described MS Dhoni’s Test captaincy as ‘obnoxious’.

But, it’s not entirely Dhoni’s fault that his strategies have backfired. The team has to be equally responsible for this failure. Dhoni needs to take some risks in order to make such strategies work, and the team should always be there to back up such moves by the Indian Captain. Leading India to victory 26 times off the 53 matches played under his captaincy, Dhoni has definitely been able to make a strong impact in the world of Test Cricket.

The away performances have been a troublesome issue for Dhoni and the team, but that deosn’t mean that Team India goes for a new test captain straight away. Dhoni deserves atleast one more chance to shut the mouth of critics, and drive India back to the winning track.

While Dhoni’s successor, Virat Kohli’s captaincy will be under severe test during the Asia Cup 2014, Dhoni’s one last chance during the tour of England in June 2014 should be the final opportunity for him to take the revenge for the debacle of 2011, and set up the road for Team India to race back to that Number 1 spot.