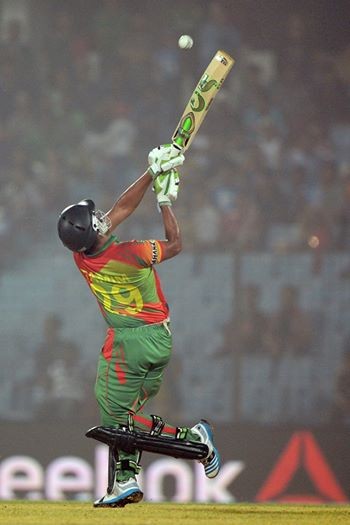 It was a day of two dominant sides as Afghanistan trashed Hong Kong in the first qualifier, whereas home favourites Bangladesh overcame Nepal in a crushing fashion.

In the earlier qualifier, Afghanistan comfortably chased down the target set by Hong Kong with 2 overs to spare. Hong Kong got off to a good start and looked good at 102 for 2 in 13 overs. But a collapse triggered by the Afghan spinners ensured that the target was well in reach for the Afghans. Strike bowler Shahpoor Zardan and captain Mohammad Nabi were their best bowlers, as both of them took 2 wickets, giving just 27 runs.

Afghanistan were spot on with their chase, as their wicket keeper Mohammad Shahzad got off to a blazing start. He and Stanikzai ensured that the chase was perfectly paced. After Aizaz bagged Stanikzai, all hell broke loose as the Shahzad- Shafiq combo anhilliated the Hong Kong bowlers. While Shahzad fell for a well scored 68, Shafiq ensured that the team crossed the line with a few overs to spare. Shafiq’s 51 came off just 24 deliveries, and such a quick knock gave Afghanistan some boost as far as run rate is concerned.

In the other qualifier, home favourite Bangladesh brushed past the new-comers Nepal in a hurried fashion. The Nepal top order disappointed, as the top three fell for just 39 on board. But captain Paras Khadka and Sharad Vesawkar stablilised the middle order, but they were too slow in making runs. Eventually, the Nepal team ended with just 126 on board, with the two middle order batsmen scoring the bulk of the runs.

The Bangladesh chase was more of a formality. The openers Tamim Iqbal and Haque got off to a flier. Though both the openers were removed in quick succession, with the scoreline reading 79 for 2, but the chase never proved to be of any trouble as captain Sakib al Hasan ensured that the Bangladesh team moves one more step forward towards qualification.