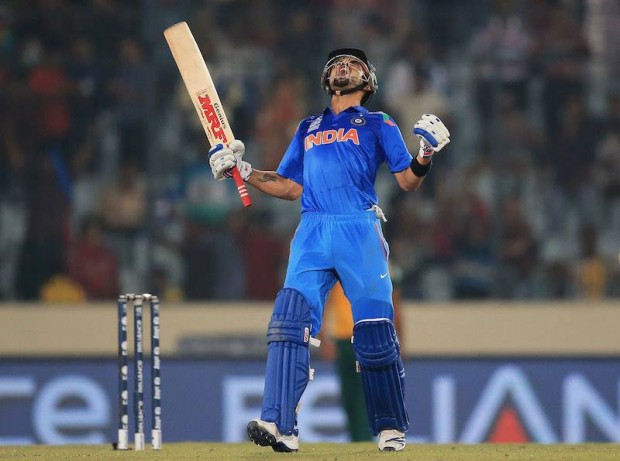 A stunning Indian chase, guided by Virat Kohli, ensured that India secured a place in the final for the second time in their T20 World Cup history.

South Africa, after having won the toss, decided to bat in a low and slow wicket at Dhaka. Going by the previous results, the sides batting second have had a torrid time facing the spinners.

India got off to a good start after nabbing Q De Kock in the very first over of the match, thanks to a late inswing from a wide-outside off Bhuvaneshwar’s delivery.
But captain Du Plessis and Amla tried to stabilise things a bit. Just when Amla looked ready for an another big innings, Ashwin struck with his very second ball, going through Amla’s defense, thanks to a ripper of a carom ball. J P Duminy was promoted, to stabilise the innings, and he was a perfect anchor for Du Plessis, who started to look dangerous. But Ashwin, again stuck in his second spell, as Du Plessis got out in an unfortunate manner. Even De Villers was removed soon, as Rohit took a splendid catch out at deep find leg.

Finally, Duminy broke loose, and a splendid cameo from David Miller ensured that SA got to a very-much defendable score of 172.

India’s chase started off in a positive fashion, as Duminy was cleared off for 14 runs from the first over of the innings. Both Rahane and Rohit looked positively aggressive, with the latter perishing on a slower delivery. But Rahane took over the role of the aggressor, with Kohli settling himself.

Rahane fell to a loose shot, and the match was precautiously placed after 10 overs. Yuvraj, though still not at his best, looked pretty comfortable at the middle, but rather preferred taking singles. Kohli started to accelerate things a bit, with the run rate required hovering around 10. While Yuvraj perished after trying to dispatch Tahir out of the ground, it was a blessing in disguise, as Raina broke loose against Wayne Parnell, which eventually turned out to be the decisive over.

Though Raina got out for a helpful cameo, it was job done for India as they chased down the target with 5 balls to spare. Earlier, Dhoni showed a gentleman’s gesture, as he preferred to play a dot ball, and give chance for Kohli to finish it off.

Kohli was deservingly awarded tha man of the match. India will take on Sri Lanka, in an all-Asian final at Dhaka on Sunday.