Arsenal:
Arsenal bid £40,000,001 for Luis Suarez but Liverpool hold firm via Telegraph.
Arsenal are lining up a big for £30M rated Benfica winger Eduardo Salvio.
Arsenal have told QPR that Julio Cesar will have to accept a pay cut to sign for the club.
Luis Suarez wants to hold talks with Arsenal over a potential move.

Liverpool:
The Echo say £50M plus and a transfer request is the only way Suarez will be allowed to leave.
Coutinho - ‘‘All of the players want him (Suarez) to stay and we have been trying to persuade him to stay’‘.
Liverpool will have the final say on Suarez’s future, I very much expect him to stay but every player has a value and no player is bigger than the club - Rodgers
Liverpool finalizing loan deal for Valencia Aly Cissokho. He should complete his loan move to LFC this week (Fee is €1M). Buy option at the end of the loan is €4M.

Manchester United:
Manchester United is making a third bid of €40M for Fabregas, according to tomorrow edition of Mundo Deportivo.
Mundo say Fabregas to UTD could be more possible after departure of Vilanova who saw him essential.
MUFC want make a marquee signing before letting Rooney go and have told the Blues to hold off making a second bid until then (DailyStar).

Chelsea:
Mourinho - ‘‘We don’t have players to sell, so none of my players are leaving under any circumstances’‘.

Newcastle United:
Confirmation of discussions between Newcastle and QPR regarding Loic Remy, enquiry and no more at this stage.
The Magpies are set to make another move for PSV Eindhoven goalkeeper Jeroen Zoet after having their first bid rejected.

Napoli:
Higuain to Napoli could also be closed as early as today as the clubs have agreed.[Marca].
Higuain is done almost for €37M + €3M add ons.

Real Madrid:
Marca reckon Bale isn’t playing because he’s told Tottenham he wants to leave, who is likely to land in Real Madrid.

West Brom:
West Brom are keen on Kalou, West Ham also want him but also have their eyes on Remy.

FC Porto:
According to many leading sources, Bernard to Porto is 110% a done deal.

Premier League - Where Anyone Can Beat Anyone 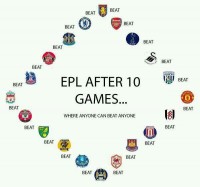 Where are the SAS heading to?