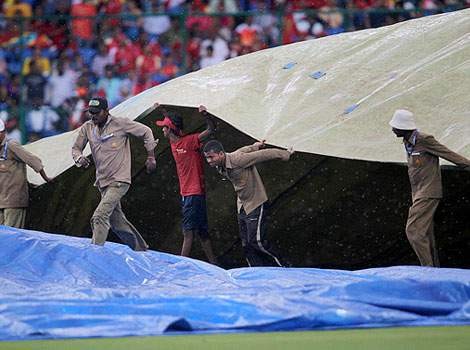 After Australia had posted a daunting total of 295/8, India were 27/0 in 4.1 overs as rain stopped play for the second time in Ranchi. At 20:50 (IST) the match was called-off due to rain. Earlier today M.S. Dhoni won the toss and decided to field first. Shami Ahmed who replaces Ishant Sharma for obvious reasons started off well picking earlier wickets of Aaron Finch, Phil Hughes and Shane Waston. Australia, after a shaky start were 71-4 at a time but thanks to Captain George Bailey(98) and Glenn Maxwell(92), Australia were able to post a score of 295. Shami Ahmed had the best bowling figures for India picking up 3 wickets with career-best figures of 3/42. Indian bowling improved from last match as the line and length was better, giving lesser room to the Aussie batsmen. But Indian fielding seemed quite ordinary as Kohli, Yuvraj and Dhoni dropped few catches. But the game ended on disappointing node as the match ended with a tie. Australia lead 7-match series 2-1. Next match will be played in Cuttack on 26th Oct.