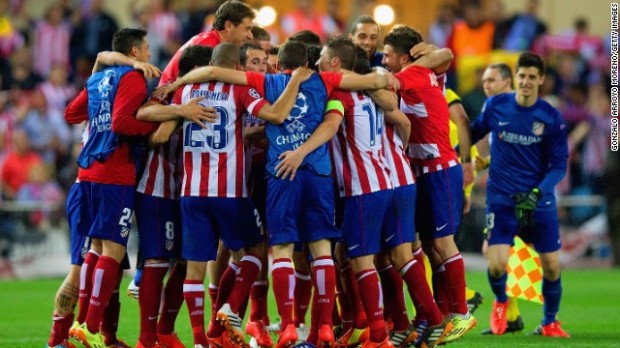 Atletico Madrid played a 1-1 draw at Barcelona to win the 2013-14 La Liga title. It was a tremendous achievement for the Madrid based club to win the title given that their budget is almost 1/6th of that of Barcelona and Real Madrid.

Atletico Madrid had a three point lead at the table and only needed to avoid defeat at Camp Nou. The game at Barcelona was started with Barcelona controlling the possession with the knowledge that they could win the title with a win over the Rojiblancos. And luck seemed to be on Barca’s side as Atletico best players of this season, Diego Costa and Arda Turan were substituted early in the 1st half. Barcelona drew the first blood with Alexis Sanchez scoring a belter to send the 98000 Barca fans into delirium.

But Diego Simeone and his troops had other plans as just 5 minutes into the 2nd half, Diego Godin scored a header to level things up. And their brilliant defence held firm as they won their first League title since 1996 season.

All eyes now will be on the Champions League final on 24th May as Atletico will play their city rivals Real Madrid.

Barcelona and Juan Cuadrado - Not made for each other!