The Gunners look confident but the league title seems far-fetched 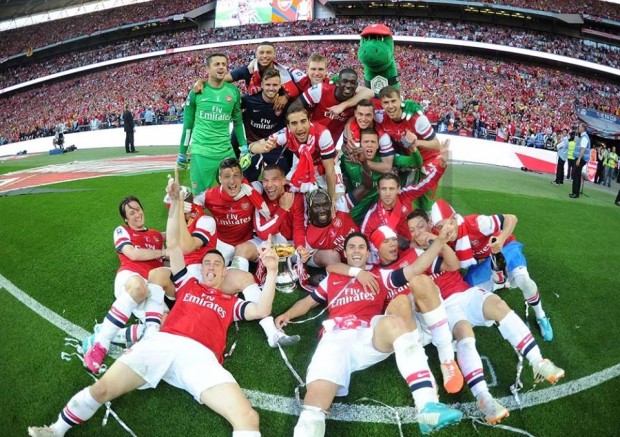 The last season, although Arsenal performed better as compared to their previous seasons, they could finish only 4th in the league and were knocked out of the Champions league in the round of 16 stage again. They won the F.A. cup though, which finished their nine year cup drought and thus are expected to be more confident for the upcoming season. But do the gunners have the muscle to win the title?

Aaron Ramsey was the best player on the field for the gunners with 15 goals and 9 assists despite being away due to injury for four months. Not only by his stats, but also by the sheer tenacity with which he attacked at the front and defended at the back was unmatchable. At the back, the pair of Laurent Koscielny and Per Mertesacker was difficult to break. Both of them along with Szczesny were a big factor in Arsenal performing so well last season. Ozil had an average season at Arsenal as opposed to what was expected from the star signing but a lot of his performances also depended on the poor finishing of Oliver Giroud. Giroud faced a lot of criticism but with 22 goals and 10 assists, he was the top-scorer for the Gunners.

Arsene Wenger had many problems because of injuries to Ramsey and Walcott, who were an important part of their season plans. Wilshere, Ozil and Koscielny were also out of action for many games. This added a lot of pressure on the depleted team and in the end it resulted in an average season for them. With Sagna and Vermaelen having left the club, they needed a defensive midfielder and a central defender to shore up their defences. Another replacement could have been of Giroud but Wenger had different plans.

This transfer window was again expected to be a dud for Arsenal once Wenger was seen playing foot-volley on the Brazilian beaches. But after a few days, once the Sanchez signing was finalized, the fans heaved a sigh of relief and a sense of excitement surged. He further signed Mathieu Debuchy, David Ospina, Calum Chambers, and the Costa-Rican Joel Campbell. Sanchez can operate centrally, can operate wide and is also an attacking player with great speed. He, along-with Theo Walcott can provide high speed at the front and can surprise the opposite teams. With Ozil, Sanchez, Walcott, Ramsey, Podolski, Giroud/Campbell up-front, the gunners have a menacing offence to start the season with. After losing Vermaelen, Arsenal would hope that the Koscielny injury isn’t a massive one. If the Arsenal defence can perform above the standards set by them last season, the team can hope for a top finish.

With Chelsea adding to their strengths by signing Cesc Fabregas and Diego Costa and Manchester City having the quality they had last season, it seems unlikely that Arsenal can get the top two spots. Realistically, looking at the team sheets, the highest they might finish is at number 3.