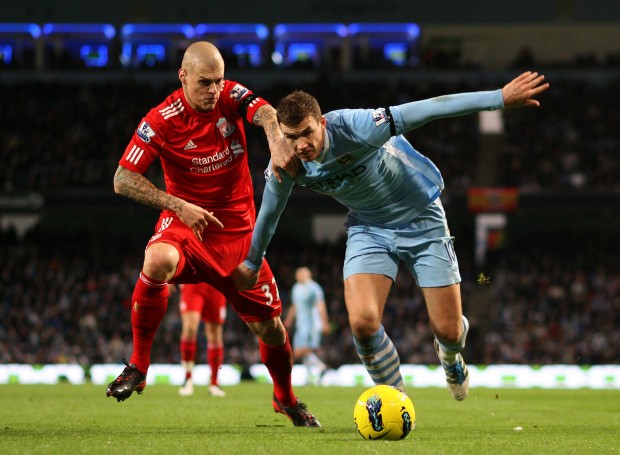 The battle between the premier league winner Manchester City and last season’s runner up Liverpool’s will be an intriguing one. Last time around, the Reds just gained ability to compete with their title rivals away from Anfield this season, last time around collecting a big 0 from the 9 points available on their travels to their rivals in the top-4. Rodgers will be looking at this when they travel to Manchester in their first away match at Etihad Stadium., bringing a point back to will be a huge morale booster for the Reds.

Alberto Moreno the brand new signing from Sevilla is expected to make his debut and along with Glen Johnson on the opposite end providing an excellent pair of full-backs comparable to any other club’s in Premier League. On the front, newly formed SAS that is Sturridge and Sterling will be ready to attack opposition at every invitation. The midfield battle will be interesting with Joe Allen and Emre Can both fighting for minutes, replacing Lucas Lieva in Red’s midfield partnering captain Steven Gerrard. Talented Lazar Markovic is also expected to make his debut against the Citizens. Philippe Countinho will try to exploit any space and time provided on the ball to create chances for his teammates. But the most crucial thing will be how Skrtel and his new partner Dejan Lovren solve their defensive frailties to stop Aguero, Silva and company. Interestingly ex-Man City striker Mario Balotelli who is expected to sign for Liverpool from Milan will be missing out from this Super Mario night.

Aguero was the goal-scoring substitute against the Magpies, is most likely to replace Steven Jovetic in starting line-up, otherwise mantra will of keeping the same winning combination that did wonders last season. With incredible squad depth and a star studded team with the right attitude, new signing Eliaquim Mangala from Porto is the only superstar acquisition. Otherwise midfielder Fernando, right-back Bacary Sagna and keeper Willy Caballero are only squad players in this Manchester side. Skipper Vincent Kompany will be the main man in defence while Navas and Silva will show their flair in the attack.  Most important of all will be the midfield partnership of Toure and Fernandinho providing a real test for the Red’s midfield.

Against a passing side like Liverpool, Pellegrini might start Silva in a number 10 role with Nasri and Navas covering flanks. Though starting Stevan Jovetic/Aguero – Edin Dzeko pairing is enticing at Home, shackling Coutinho, their key man while in possession is much more important. Maintaining possession will be easier said than done at the Etihad as opposed to Anfield. Thus, Liverpool’s ability to attack on the counter with speed and precision will be Rodger’s equally important weapon. At the back, Rodgers will be setting up the team to defend like Spartans, defending every blade of grass, tight as a unit and closing down the space for City’s midfielders like Silva, Toure and Fernandinho. So pressing high up the pitch and releasing Sturridge and Sterling who thrive on counters are to be watched out for.

Brendan Rodgers hailed his team’s spirit in grinding out 3 points against the Saints last week, but the next opponent is one which is known for crushing the opposition and their resilience. The Citizens undoubtable have the better squad, but as they say “football is a funny old game!”  Should Mignolet, Skrtel and Lovren eradicate their defensive lapses and the team press collectively, coming away from the Etihad stadium with points will be attainable. But if the team in Blue are allowed to dictate proceedings, it will be a sure shot defeat for the Kopites.