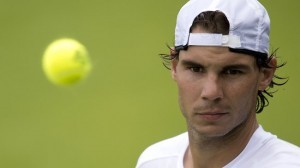 World No. 5 Rafael Nadal hopes to give tough challenge to his rivals World No. 1 Novak Djokovic, 17-time Grand Slam holder Roger Federer and Britain Andy Murray this season, where he is looking very confident to compete top three in upcoming clay court season.

Rafael Nadal says he needs little more time to give best challenge to his rivals on ATP Tour. Nadal said its tough to beat them after returning back from knee injury considering they are playing at their best.