Man City loses at Everton as title bid slips away 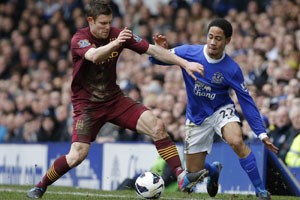 Manchester City’s faint hopes of catching Manchester United in the Premier League title race took another heavy hit with a 2-0 loss at Everton.

City went behind in the 32nd minute though Leon Osman’s bending strike and the champions couldn’t take advantage of Everton being reduced to 10 men on the hour when Steven Pienaar was sent off.