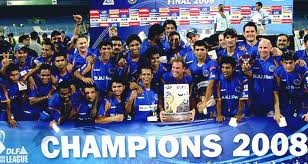 Ever since the Rajasthan Royals broke through the underdog tag and sprung forth to surprise one and all when they clinched the first edition of the glamorous and glittering IPL, their achievements in the cash rich tournament hasn’t been that of much conceit.
The last season for instance, The RRs promised to be a force to reckon with, but as the tournament evolved, their potency faded away ; Courtesy some close matches that didn’t go as their supporters would have wanted it to. But the Royals found their silver lining too, the opening pair of Ajinkya Rahane and their Skipper Rahul Dravid proved to be the pivotal key in their performances, not to forget the swashbuckling English batsmen Owais Shah whose swift innings earned him his fair share of limelight.
Come this year, The Royals are set to regain their reputation. With foreign players like James Faulkner  ($400,000), Kushala Perera ($20,000) and Fidel Edwards ($210,000), their repertoire is full of fire. A strong looking pool of young Indian talent including Harmeet Singh, Sanju Samson and Sachin Baby were also included in the squad as they promise to enhance the vivacity of their team.
One must also point out the fact that the bowling department seems to be slightly toothless. Although Siddhartha Trivedi has looked promising, their side seems overtly dependant on Shaun Tait and Brad Hogg. Having said that, much would be expected out of James Faulkner and Kevon Cooper as their bowling may provide an extra edge to the otherwise dull bowling strength.
Batting, on the other hand remains Rajasthan Royals greatest strength. Dravid and Rahane’s pair was a revelation in the last season which should be enhanced by the batting of Australian All Rounder Shane Watson who would have a point or two to prove to his critics back home and here in India. Furthermore, Owais Shah and Brad Hodge are the other two specialist T20 batsmen that RR boasts off. Their ability to absorb pressure and to come forward with a sporadic knock is good enough to snatch the game on any given day.
After the poor show at the Box office of the points table last season, Rajasthan royals would be more than roaring to go on the field and clinch back the title this season. With the never-ending support of their glamorous owner (s), and under the watchful and observant eye of their captain Rahul Dravid, Rajasthan Royals are set to be back in winning business and that too with a bang.
Dare not take your eyes off them.
Key Players: Rahul Dravid, Brad Hodge, Ajinkya Rahane, Shane Watson, Shaun Tait.
Players Retained: Rahul Dravid, Ajinkya Rahane, Ajit Chandila, Ankeet Chavan, Ashok Menaria, Sreesanth, Shreevats Goswami, Siddharth Trivedi, Stuart Binny, Shane Watson, Brad Hogg, Kevon Cooper, Brad Hodge, Shaun Tait.
Players Dropped: Johan Botha, Deepak Chahar, Dinesh Chandimal, Samad Fallah, Aditya Dole, Faiz Fazal, Sumit Narwal, Pankaj Singh, Amit Pauniker, Abhishek Raut, Pinal Shah.
Players Bought: James Faulkner ($400,000), Fidel Edwards ($210,000), Kushal Perera ($20,000). Harmeet Singh, Sachin Baby, Rahul Shukla and Sanju Samson.
Foreign Players: Shane Watson, Brad Hogg, Kevon Cooper, Brad Hodge, Shaun Tait, James Faulkner, Kushal Perera, Fidel Edwards/
Domestic Players: Rahul Dravid, Ajinkya Rahane, Ajit Chandila, Ankeet Chavan, Ashok Menaria, Sreesanth, Shreevats Goswami, Siddharth Trivedi, Stuart Binny, Harmeet Singh, Sachin Baby, Rahul Shukla, Sanju Samson.
Tweet

RR is perhaps the only team in IPL that follows the "moneyball" mantra: buy great value for money players who are hungry for success. Under Warne , it gave them rich dividends as well. But they seem to have lost the mojo in the last few seasons. Time to regroup and perform.