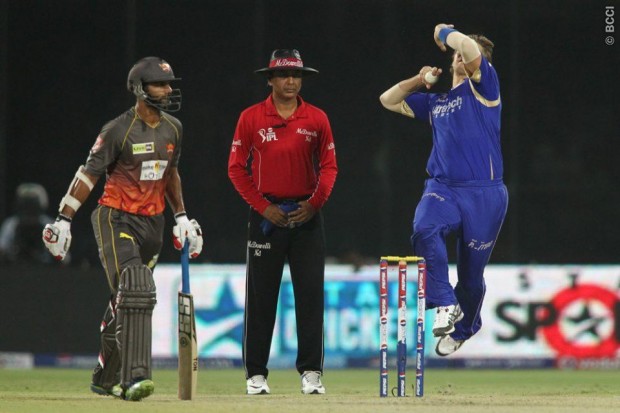 Here comes, not the most awaited but an important clash between the two underdogs of IPL-7 , Royals and Sunrisers.
The match will definitely decide the supremacy over each other. In previous clash Rajasthan won it, definitely, but was a close match.
This is interesting because the royals are in form have won continuously 4 games,  while Sunrisers are looking little in a dump zone as there star performers continues to struggle.
The batsmen started to create big scores but the bowlers are doing enough to avail the opportunity.
Rajasthan are in a great form with Pravin Tambe the new emerging player of the tournament scoring the first hat-trick in this season which proved to be the game changing one against the kolkatta.
Another youngster Karun Nair is doing well giving the royals a head start with Rahane.
Middle is been always the strongest part of royals batting comprising of Watson, Binny, Faulkner, Smith and Bhatia who could finish any game on their own.
As far as Sunrisers Hyderabad are concerned, skipper Shikhar Dhawan will need to lead from the front.
A good start is of paramount importance in this form of the game, and Dhawan knows it too well.
He has the aggressive Aaron Finch for company and if the duo gets going, it will be ominous for the opposition.
The in-form David Warner lends muscle to the middle-order, with all-rounder Darren Sammy following him in the batting order.
Pace spearhead Dale Steyn will lead the attack with the Indian duo of Bhuvneshwar Kumar and Ishant Sharma playing the support cast.
Sammy and Irfan Pathan are the other two medium pacers, while Karn Sharma will shoulder the responsibility in the spin department.