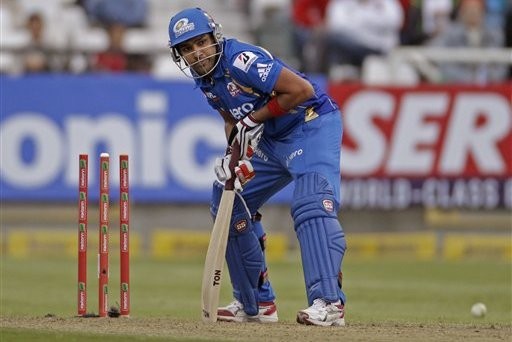 Mumbai Indians – the current IPL champions – have failed this season. Starting the season with 4 straight losses is not a good omen. And that is sugar coating it.
They have so far in 4 games managed to score 503 runs in 80 overs. To put this in perspective former Mumbai Indians players Glenn Maxwell and Dwayne Smith have together scored 540 runs having faced a little over 52 overs among them. Kings XI Punjab have produced scintillating batting and bowling performances over the course of their 5 wins this season. The 1st 3 games were won thanks to the batting performances of Glen Maxwell, the recent 2 wins were thanks to the bowling department which featured dominating bowling from Mitchell Johnson and Rishi Dhawan. For the uninitiated, these two are also former MI players. Suryakumar Yadav who struggled for game time at MI, has become a mainstay for Kolkata this season and boasts a strike rate of 183.72 at the end of the innings. Dinesh Karthik has lead Delhi Daredevils from the front to their 1st win of the season against Kolkata. Here it would be easy to conclude that Mumbai Indians set them up for this fate with their player retention and auction strategy. However that would be the equivalent of hiding an elephant carcass under the rug.
The team has just not clicked. Ajit Agarkar says, that Mumbai Indians lack depth. Russel Arnold says that their batting order is just not good enough. Mark Butcher says that the squad is generally too old for this format. Whether these experts are right or not is a story for another day. The cold hard fact is that things has gone horribly wrong.
Their batting lineup features, Rohit Sharma – who not so long ago hit a ODI double century against Australia, Corey Anderson – record holder for fastest ODI Century, Keiron Pollard – T20 specialist and a force behind MI’s win last season, and Mr. Cricket Michael Hussey himself. While that sounds great, this seasons numbers don’t. Their top scorer this season is Ambati Rayudu who has scored 98 of the aforementioned 503 runs and taken a cool 100 balls to get there. The highest strike rate of all these batsmen is Rohit Sharma’s – 116.90 runs per 100 balls. Their batting line up often features 3 wicket keepers – Aditya Tare, CM Gautam and Ambati Rayudu and none of them can be considered genuine batting options. Ben Dunk is a name that has been raised to rejuvenate this line up but even he is an unproven quantity in these conditions.
The bowling hasn’t fared much better either. Lasith Malinga aside, all other bowlers have failed to deceive, especially the all-rounders Pollard and Anderson. The worst worrying part is that Malinga will not feature in the Indian leg of the tournament starting May 2nd. Pollard and Anderson have combined for 10 overs so far with bowling figures of 1-101. With a team scoring at a little over 6 runs an over when you cannot afford to have main bowlers going at 10+ runs an over. That doesn’t take a genius to figure out. The bowling unit – Malinga has so far not promised much. And that will be a real cause for concern for Mumbai. Whether Krishmar Santokie, Merchant de Lange or Josh Hazelwood can take up the mantle remains to seen, but the growing fear is that event that may not be enough.
Jalaj Saxena’s injury has allowed Mumbai Indians to bring in Lendl Simmons. He is a top order batsman and part time medium pace bowler. Not the most accomplished T20 record but given MI’s performances so far this season, could be their savior. I wouldn’t bet my money on it though.
With an all round failure, Mumbai are more likely to claim a maiden wooden spoon than to repeat their heroics of last season. With 10 games still to come, including 9 in India they are still in with a chance to make it to the knockout stages. With 14 points being the minimum to have any hopes of making the top 4, Mumbai need to start winning. As it stands now, MI needs a 70% win percentage to have a ‘chance’ of qualifying for the knockouts. This will not be possible unless the spine of the team, the 5 retained players excluding Malinga, make a much bigger contribution than they already happens.

Does Rohit Sharma deserve to be in Indian cricket team?