IS LUIS ENRIQUE THE RIGHT MAN FOR BARCA?? 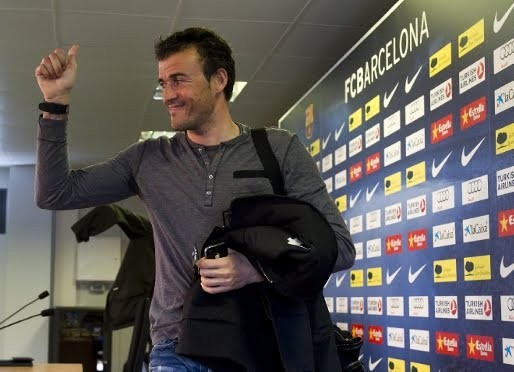 After the disastrous season, the director of football at Barcelona had promised of some huge changes at the football club. Messi just signed a new contract and Ter stegen became their first summer signing but nothing overshadows the appointment of Luis Enrique as their new manager. It is a huge responsibility on his shoulders and after the debacle this eason, the fans are certainly hoping for a turnaround of fortunes.

Luis Enrique is not at all a new name for the fans and they see him as an adopted catalan. He grew up as a barca fan and became a fan favourite within no time after having the jersey on. This man is not the kind of person who likes to sit idle. After retiring from football, he started running marathons and soon graduated for running triathlons and ironman contests.  And then he went for the lunacy of running i.e running 250 kilometers in 6days under the burning sun in the deserts of Sahara. This man has the habit to achieve the peaks when he enters a particular field and the present job at hand is no less than the mountains he is looking for.

He is man who values hardwork and expects the players to give their 110% throughout the season. With a lot of media reports around about Barcelona being too lethargic and lazy this season, he might prove to be the man that the club is looking for. The Media targeted the barca players and especially Messi who was at the neck of their guns throughout the season. He would have a colossal task at hand to bring the lost spirit and bring back the side to winning ways which had been in jittery the entire season. There are already speculations of the Trio (Xavi, mascherano and fabregeas ) leaving this summer and whatever happens, he has to get the right combination of players before the start of the season.

Enrique began his coaching career by taking over Barcelona B in 2008, immediately after Pep Guardiola was promoted to first-team manager.  After just two seasons in charge, he led the reserve side back to the second division after an absence of over a decade. After this success, he quit the club for top flight experience by joining the Italian side Roma in 2011. He had a miserable season with Roma and had to leave theclub within just one year. Then he moved on to Celta Vigo when the club was struggling with almost everything. He helped the club and managed to finish 9th which was nothing less than a success. Just two years of senior level managerial experience in which he had a 50% success rate proves the fact that he lacks experience. On the contrary, he had his entire playing career in Spain and his managerial career with regards to Spain has been a thumping success.

Regardless of his strengths and weaknesses, he is at the helm of Barcelona and it is by far the hardest and the most challenging job that he has ever undertaken. Can he deliver, the world would have to wait and watch. But for the time being, it is certainly Barcelona’s best bet.

LIVERPOOL WILL STRUGGLE WITHOUT SUAREZ