Sanju Samson: The Next big thing in Indian cricket 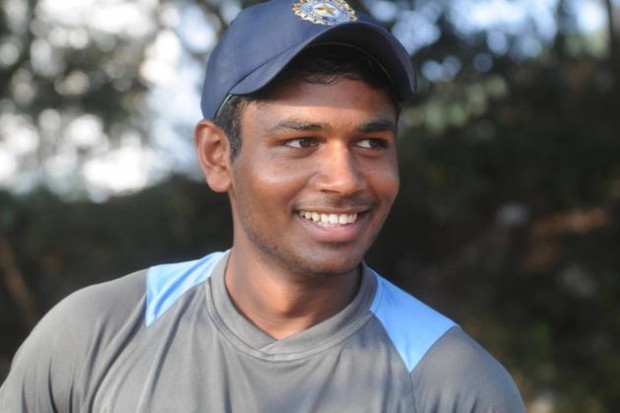 It was an emotional day at the residence of Liji Hut when the news of Sanju Samson’s entry into the Indian cricket team reached his village.19-year-old Samson was attending his usual training session in the Thiruvanthapuram Medical College ground.When he returned to his residence Liji Hut in Mulloorkonam, a coastal fisherman village near Vizhinjam, he was welcomed by villagers and TV channel crews outside his house. Sanju was chosen to fight England in the five-match ODI series and one-off Twenty 20 against England. The first match of the series, which got washed out, was in Bristol on August 25.
It is a dream come true for any sportsman to dress up in the Blues. And most importantly for a youngster like Sanju Samson the situation is perfect to take full use of. The Indian batting has been struggling in England except for a few brilliances in the likes of Raina which we saw in the 2nd ODI. Most of the players who form the batting mainstay are out of form or are injured. If he can play a match winning innings or show some sparks of being a match winner than he would definitely be in reckoning while the side for the 2015 world cup is chosen.
Sanju Samson had burst onto the scene during the Indian Premier League (IPL) 2013 when he played some aggressive knocks for the Rajasthan Royals. His fearlessness and audacity in stroke play caught the eye as the teenager took on some of the best bowlers in world cricket. For that effort, Samson was awarded the Rising Star of the Tournament and was earmarked for success. Samson was one of the five players retained by Rajasthan ahead of the 2014 season. Along with his destructive batting, he is capable behind the stumps.
One of the prime reasons why he should be given some time in the middle in the England tour is that he is among the few batsmen in the U-19 cricket team who have dominated the bowlers in foreign conditions as well.  Sanju Samson‘s coach Biju George feels that his ward possesses the grit of Rahul Dravid as well as the flair of AB de Villiers which will make him a special player for India in the coming days. Of late Sanju, who was the leading run-getter for India A in their victorious campaign in the quadrangular one-day series in Australia with 244 runs from seven matches, has been following AB for his flamboyant attitude towards the game – whether he is batting, fielding or wicket-keeping, George said. Samson is a batsman-wicketkeeper because he has a very good technique as a batsman and plays aggressively too. He has the controlled aggression too within him, he knows which bowler to target and which bad bowl to pick. He brings with him more flexibility to the Indian team as he can bat at any position and moreover his wicketkeeping skills will ease of constant dependence on captain Dhoni.
Some cricketing pundits see in him the next Dhoni but that will be a too farfetched conclusion to make. All that we can say at this point is that he has all the qualities needed to give India a perfectly balanced squad.

Is it the final Bugle for Dhoni?