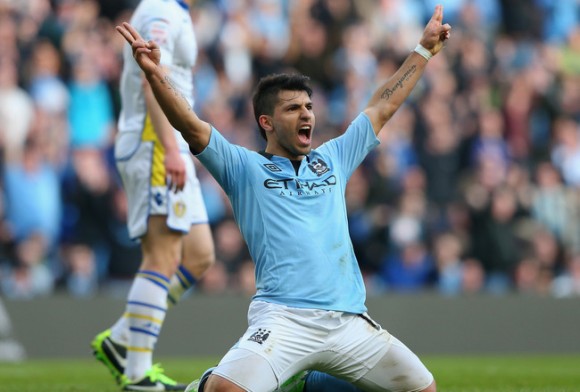 Venue: Etihad Stadium,Manchester
The two teams backed by billionaire owners clash for what is going to be a crucial match for both the teams.For Chelsea this will be an important win allowing them to reduce the gap to second place to just 1 point thereby increasing their chances of finishing runner up.While Man city, before coming out to play against Chelsea might find themselves 15 points behind league leaders if Man Utd win their fixture against QPR tomorrow.
So,for the citizens this match is a must win else they will lag behind the leaders and their chances to put up a fight for title will certainly be minimal.Thus,a must win tie for both teams and we can hope for a very aggressive and exciting clash as none would be satisfied with a draw.
Probable LineUps:
Man City:(4-2-3-1)
Hart
Zabaleta-Kompany-Nastasic-Clichy
Garcia-Toure
Silva-Tevez-Milner
Aguero
Chelsea:(4-2-3-1)
Cech
Ivanovic-Cahill-Terry-Cole
Lampard-Luiz
Mata-Oscar-Hazard
Ba
Man City captain Kompany missing the last 4 games games with calf injury is still a doubt for Chelsea clash but he might play. While Barry who was substituted against Leeds due to ankle injury will give a late fitness test.
Chelsea meanwhile has no major injury concern except Romeu.
Prediction:
Since Dec 2010 Man City has just lost 1 game at home in Premier League and that was against Man Utd in September last year. So the chances of Citizens loosing are less.Also Chelsea have not won a match away against City with their last victory registerd in Sept 2008.
With the last meeting between these resulting in a draw I would go with another exciting affair between the two but due to home advantage of City I predict a City victory.
A 2-1  win for City.
Tweet