IT'S ALL ABOUT NERVES: CITY WERE WORTHY WINNERS UNDOUBTEDLY 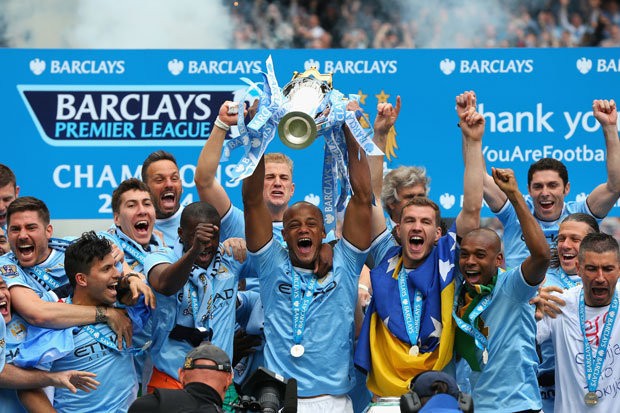 It has been one of the most tightly contested premier leagues of this era and the blues held their nerves to lift the trophy for the second time in three years.  With all due respect, Manchester City deserved to win the title because they played their best football when it mattered the most.  Manchester City had a 5 match winning streak at the end of the season and when you are fighting for the title in the most competitive league of the world, you are expected to do just that.

There was Branislav Ivanovic’s February winner at the Etihad Stadium, seeming to suggest Chelsea had the power and the tactical nous to carry all before them. Then came Philippe Coutinho’s decider in City’s five-goal thriller at Anfield, the moment when Liverpool’s momentum appeared irresistible.  It was followed two weeks later, crucially and cruelly, by the slip that inspired a song, when Steven Gerrard lost his balance and Liverpool lost control of their own fate. Demba Ba scored for Chelsea and Manuel Pellegrini was propelled to glory, in part, by his old enemy, Jose Mourinho. Viewed that way, City became champions by default. They were the side left standing when others stumbled.

It is, of course, hugely unfair. Not just because the league table famously never lies, but because they were the second-highest scorers in Premier League history and, unlike Liverpool, they married a prolific return with acceptable levels of defending. City were not as frugal as Chelsea, but they were far more adventurous. They were a side equipped to hold their nerve. Roberto Mancini’s team won their final six games to become champions two years ago. Manuel Pellegrini’s side finished with five straight wins. Many of the personnel involved were the same and some of the others, such as Fernandinho, Martin Demichelis and Javi Garcia, had the experience of navigating a path to victory in title races abroad. It meant City’s was not as romantic a tale as Liverpool’s remarkable renaissance. Ultimately, however, there was that vital extra element of substance to underpin the style. Hard-fought victories at Crystal Palace and Everton acquired extra meaning.

Toure became only the second midfielder in the Premier League era to reach 20; factor in his nine assists and he was almost providing a goal a game from a deeper position. Fernandinho proved the most significant signing of the season – at least as far as the title race was concerned, anyway – and Pellegrini’s decisions to bring in Alvaro Negredo and keep Edin Dzeko were vindicated. The Spaniard was startling good for a while but, when his goals dried up, the Bosnian chipped in at the business end of the campaign.  Then the starlets at city, Nasri and Silva had crucial roles to play in the title run. Kompany has been the backbone of the City defense throughout the season and he has proved himself that he is the most reliable defender in the country.

Together, they have been the league’s outstanding unit. If there wasn’t one deciding, defining moment, it was because, over the course of the season, plenty of players contributed to make them the strongest side. In a wonderful year, they were worthy winners.