Sunrisers down Royal Challengers in a thrilling Super Over finish 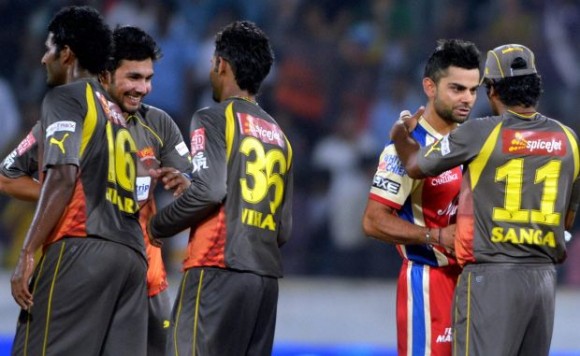 Deccan chargers fortunes would have changed if they had changed their team name and their jersey.  Look at Sunrisers Hyderabad now they all look rejuvenated and defending low totals and edging out teams well above their ranks and most importantly winning their home games which deserted the earlier Deccan Chargers at home.

Certainly SRH have the momentum in their hand.  It was all down to the Super over when SRH tied the game in the final over bowled by the new ‘death over specialist’ Vinay Kumar. RCB would have completely avoided a draw match if the wicket keeper had been standing up to the stumps for the final delivery  Vinay Kumar is no Dale Steyn in terms of speed.  Clearly there was tension on the field and RCB did not do their basics right.

It was the hosts who started the game on the right note when they bowled tidy spells and fielded brilliantly to restrict RCB for a modest total and then later on led by Hanuma Vihari with his cautious knock of 44 runs from 46 balls which helped Sunrisers to edge close to the total. There was a point where SRH needed 28 in 3 overs and and 6 wickets down but 17th over by Vinay Kumar he went for a plenty and SRH deservedly took the game to Super over for a thrilling finish.

RCB on the other hand performed very poorly who were able to just score 130 runs where captain Virat Kohli 46 and Moises Henriques 44 were the top scorers. RCB were dealt a huge blow when Gayle was dismissed by a part time bowler in Vihari and even Dilshan went cheaply.  On the back foot early in the innings it was damage restoration done by Virat and Henriques who replaced poor Daniel Christian and performed well in his first match in IPL.  Because RCB lost wickets at regular intervals they were unable to score a good total.

RCB bowlers need to get a special mention here they took wicket at regular intervals where Unadkat, Henriques & Murali bowled really well the only thing which did not help RCB was the number of extra runs that was conceded and that significantly helped the SRH to tie the match and then Dale Steyn restricting RCB who sent in Gayle and Kohli in the Super over.  Vinay may be a death over specialist but not a Super over specialist may be RCB could have gone for Muralitharan instead, he might be a spinner but he is not just any other spinner  and wouldn’t have gone for plenty.

All said and done, it was hard luck for team RCB and change in fortunes of team Sunrisers  Hyderabad who truly have momentum on their side at home.  But, will they be able to replicate the same when they travel away is a true test for them.