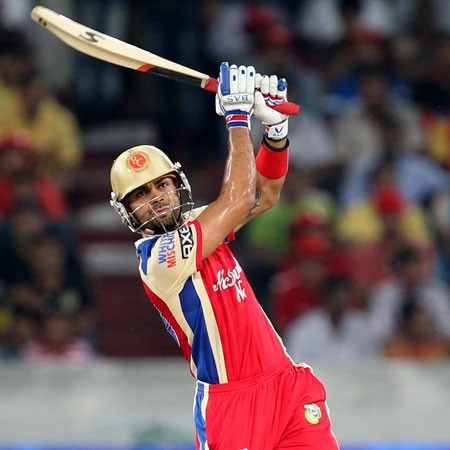 It was a good all round performance from Royal Challengers Bangalore to take a sweet revenge over Sunrisers Hyderabad who defeated RCB a couple of days ago.  RCB’s cause was helped by none other than captain Virat Kohli who scored 93 runs and won the match for them with 2 overs remaining to get the NRR up.

It was Mayank Agarwal who led the proceedings for RCB where he took on Vihari for 12 runs in the first over of 2nd innings.  Sangakkara tried the same tactic again but it did not work out this time.  After having a slow and steady start both the openers were dismissed cheaply and it was a concern when Gayle failed against the same opponent.

In came Virat Kohli who looked like a man possessed and took on Perera as soon as he came on the pitch, he also made it difficult for Amit Mishra and Reddy to settle as he constantly took them on and scored runs at will.  It was in the 12th over, when Cameron White was introduced and AB de Villiers perfectly fell for the trap led by Sangakkara when he offered a straight forward catch to Vihari deep mid-wicket. That was the only scare or a blip of moment where Sunrisers Hyderabad thought they got back in the game but Virat Kohli had other plans.  Along with Henriques, Virat went on to make his highest score in IPL tournament in all 6 seasons scoring a match winning 93 runs for RCB.

Earlier Sunrisers Hyderabad after winning the toss and decided to bat had a bad start to their game.  RP Singh was given the new ball and he took Akshath Reddy’s wicket early on.  Though Parthiv and Sangakkara had starts could not convert them. It was Cameron White and Thissara Perera’s partnership which boosted Sunrisers to a respectable total.  Their 80 run partnership in just 44 deliveries helped their team to defend a good total at the Chinnaswamy stadium.

With Virat Kohli finishing the formalities with 14 balls to remain helped RCB’s Net Run Rate cause which will help immensely in the later stages of the tournament, also what we saw was that Kohli’s performance has not gone down with captaincy pressure on him in fact it has propelled him to do well.  Virat’s MOM performance gives a great confidence boost to RCB who hugely rely on Chris Gayle to deliver time and again.  With AB de Villiers back in the team RCB will be a more balanced side than before and will be eager to do well in the rest of the tournament.