Manchester United manager Sir Alex Ferguson has confirmed he will be stepping down from his post at the end of the season after more than 26 years in charge. 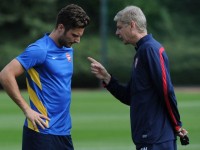